A leading U.S. manufacturer of food service and retail fixtures and dealer of related equipment for national restaurant chains such as Dunkin Donuts, Papa Johns and Burger King, and big-box retailers including WalMart, was experiencing a crisis and possible liquidation attributed to plummeting sales and EBITDA coupled with rising costs. The Company had a challenging governance structure with an independent Board of Directors and multiple lenders who were also the shareholders. EGI was hired to complete a comprehensive evaluation on both a top-down and bottom-up basis. EGI’s assessment clearly delineated all aspects of the available options, including: a cash-neutral liquidation, a divestiture estimated at $10 to $12 Million, and a turnaround to relaunch and save the Company. The turnaround scenario was predicated on specific courses of action and included investment, ROI, and projected terminal value metrics.

The turnaround alternative was selected by the stakeholders to position the Company for an exit event at maximum value. EGI transitioned from an advisory role to that of interim management, ultimately providing a CEO, CFO, Vice President Sales and Marketing, and Vice President of Engineering. EGI divested an idle plant for well over $1 Million, achieved $200,000 in risk management savings, and reviewed and overhauled all critical business processes of the Company while effecting a cultural shift throughout the organization to create a platform for the Company relaunch and long-term growth. Examples of business critical actions implemented by EGI included:

Over a 12-month period under EGI’s management, the sales run rate was increased from $55 Million to over $70 Million, while the gross margin was improved by five points, with an EBITDA plan in excess of $3 Million and a projected terminal value of $30 to $35 Million. EGI then participated in the recruitment of a new management team from within the industry to take the Company to the next level based on the platform that had been effected by EGI. The Company was soon after divested for a 10+ multiple. 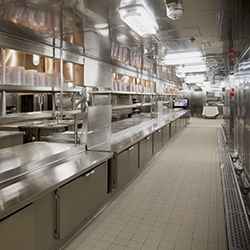